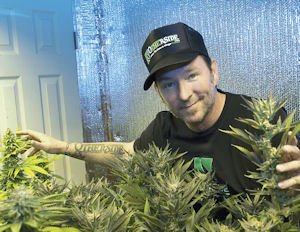 An industry has cropped up around marijuana here.  It’s made up of companies that offer goods and services to dispensaries and growers that provide marijuana under California’s 1996 law allowing its medical use.  One company teaches how to grow pot. Another runs a website that helps people find dispensaries. Another helps dispensaries with tax issues and runs a hemp products marketing business.  Most are small. Some are publicly traded on low-profile, over-the-counter stock exchanges.  They’re part of a larger pot industry here that includes growers, dispensaries, head shops and even lawyers, marketers, consultants and software management providers.  Some company executives are classic entrepreneurial types—risk takers who have a passion and a mind for business.  There also are shady operators out to make a quick buck on a business that’s expanded well beyond medical use to casual marijuana smoking.  Getting an idea of the size of the industry here is hard. In California, the business of pot is estimated at $14 billion in annual sales. Based on OC’s share of the state’s population, pot could be a billion-dollar-a-year business here, including black market and quasi-legal sales.  It isn’t for the feint of heart.  The business operates in legal limbo, which raises the stakes for entrepreneurs who are plowing time and money into businesses.

Federal Conflict
Medical marijuana is legal in 15 states and the District of Columbia. But it’s still illegal to possess or sell it for any purpose under federal law.  In Orange County, there have been periodic federal raids, while several cities have shut down clinics as they try to ban them outright.  Most pot entrepreneurs are betting on a growing industry that eventually will become legal nationwide.  “It’s inevitable,” said Chadd McKeen, owner of Costa Mesa-based Medical Marijuana Information Center.  McKeen’s company teaches people how to grow marijuana. Its weekend classes go for $300.  The company also offers consulting services to dispensaries setting up shop in other states.  One of the county’s largest medical marijuana companies is Costa Mesa-based General Cannabis Inc. It recently acquired WeedMaps, a website dubbed the “Yelp for pot” that helps people locate dispensaries.  General Cannabis also offers a slew of business services to the industry.  “We’re real strong believers in this industry,” Chief Executive Jim Pakulis said.  WeedMaps lists dispensaries online for a fee. It had $3 million in revenue in 2010.  General Cannabis also manages 11 California clinics where doctors see patients and provide medical marijuana “recommendations”—doctors don’t actually prescribe pot because of conflicts with federal law.  The company provides a credit card processing service to dispensaries, filling another gap in an industry that faces issues of legitimacy.

“(Banks don’t) want to work with anyone in the industry,” Pakulis said.  In November, General Cannabis processed $400,000 in credit card sales, according to Pakulis. It processed $700,000 in December and $1.2 million in January, he said.  “We’re slowly getting our running legs,” Pakulis said. “Now we’re starting to process in non-cannabis industries as well.”  General Cannabis employs 65 people. In March, the company is set to move to a larger, 20,000-square-foot space in Newport Beach, which has become a hub for companies catering to the pot industry.  Operating in the industry’s gray areas is challenging, according to Pakulis  “We appreciate and respect the federal government,” he said. “We certainly think about the repercussions. But in the same breath, we march on every day because we believe we’re doing the right thing.”

Publicly Traded
General Cannabis is one of about 25 marijuana companies that are publicly traded on low-profile stock exchanges where financial reporting and other requirements are minimal.  Medical Marijuana Inc. is another.  The Foothill Ranch company was the first marijuana business to become public.  One of Medical Marijuana’s first products was a tax remittance card, which makes it easier for dispensaries to collect state sales tax. It’s also working on an inventory tracking system for dispensaries.  It runs what Chief Executive Bruce Perlowin calls the “Hemp Network,” selling products made from the marijuana plant. The marketing model is like that of Avon Products Inc. and others.  Perlowin recruits Hemp Network sellers at trade shows that he puts on. He’s appeared on TV and radio shows, including CNBC’s “Marijuana Inc.”  documentary.  He also represents the pot industry’s conflicted character.  As one of the largest pot smugglers in the U.S. during the late 1970s and early 1980s, Perlowin ran a group that smuggled in $50 million worth of pot annually.  In all, he smuggled more than 500,000 pounds of marijuana in fishing boats, offloading it onto his own dock in the San Francisco Bay. He served nine years in prison.  While in prison, Perlowin said he earned five degrees.  “From day one, I saw it as an unprecedented opportunity to learn, grow and study,” he said.  “It was a very productive time.”  His partner, company President Don Steinberg, also is a convicted drug smuggler.  Perlowin uses his notoriety to market his company.  “One day marijuana will be legal, and we’ll be the largest distributors of marijuana in America—again,” he said.

Regulation
Ironically, the industry’s viability largely rests with something most businesses hope to avoid: regulation.  “Regulation is the future,” said Brea lawyer Anthony Curiale, who sued Anaheim for banning dispensaries. “It’s kind of like strip clubs and adult book stores. You can’t ban them outright, but you can regulate them.”  Clear rules from cities would allow dispensaries to operate under set guidelines, which would be a boost to secondary companies.  Curiale won a round when an appeals court rejected Anaheim’s argument that federal law allowed it to ban dispensaries.  But there’s still much left unsettled. Sacramento created a lot of uncertainty when medical marijuana guidelines were drawn up, according to Curiale.  “That’s what we’re fighting over now,” he said. 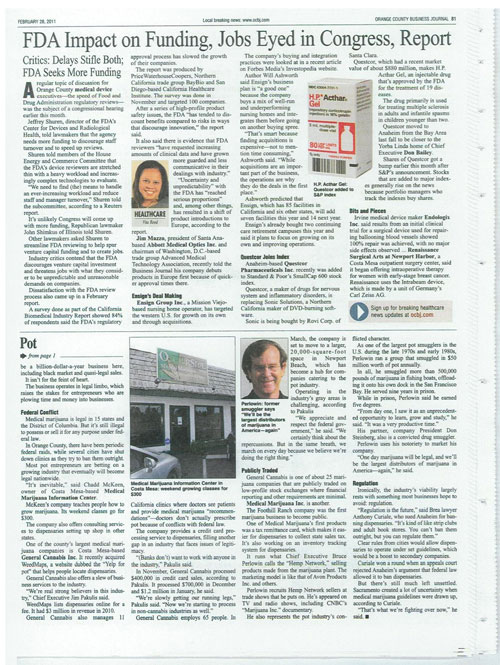